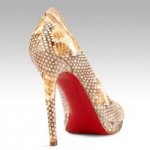 What does the future hold for fashion designers and their unique creations? One can only guess based on the Louboutin v. YSL holding that the answer is nothing, nada, cinch. Instead of fashion designers obtaining more protection like other artists and inventors of other industries, they are having their intellectual rights abruptly denied and taken away. This past week, Judge Victor Marrero denied Louboutin’s motion for a preliminary injunction against YSL for using the unique red sole that Louboutin had trademarked in 1998 with the USPTO office. Furthermore, the court stated that although the Louboutin red sole is “eccentric and striking that it is easily perceived and remembered… nevertheless, Louboutin’s claim to ‘the color red’ is, without some

limitation, overly broad and inconsistent with the scheme of trade mark registration established by the Lanham Act. Awarding one participant in the designer shoe market a monopoly on the color red would impermissibly hinder competition among other participants”. Is this really the case? There are a million other colors in the spectrum to facilitate competition within the fashion world. When I see a red sole on the street, I immediately think that it is a Louboutin shoe and if such a strong mark cannot be properly protected from infringers than what is the purpose of trademark law.
Now we can only hope that the DPPPA gets passed. Cross your fingers fashion designers!