New York Fashion Week is the time of the year when I throw on my fashionista gear and enjoy the ongoing talent of many designers, some who are known and others who are entering the fashion industry. According to my observations, many upcoming designers have lines that blow away the oldies as if a feather hit the catwalk. The first show of the season that I saw was Rita Vinieris. Her Line was stunning, couture and encompassed sexy back lines that looked nothing less than elegant.

Afterwards, I shlepped over to the W hotel for some champagne and had a chance to meet an individual, Richard Darling who’s passion for fashion is astonishing. This fact became apparent when he took my hand and dragged me to the front of the WHIT fashion showcase at which we had the chance to experience classy prints that reminded me of the outfits Julia Roberts bought in Pretty Woman (Bottom Three Pictures on Top).

As fashion week continued, I saw over 20 shows and had a chance to speak with many designers, bloggers, stylists and other individuals whom are associated with the fashion industry. It was interesting to learn that many of these people felt that the fashion field has changed over the five years in a negative direction. Many said that it became more of a popularity contest and a show off scene rather than simple appreciation for hard work and talent. Some Stylists stated that they had to check-in at shows so that people would see their involvement in the industry or they would lose respect from their colleagues and peers. That is honestly insane. I thought law school was competitive. Hence, as a fashion attorney and mentor, I was happy to have the opportunity to learn about the backbones of the industry so that I can understand my clients’ needs and guide them towards success.

Furthermore, due to my legal background, I was not able to help myself but to notice “legal” factors such as the age and body structure of many of the models. Most of the models were depressingly skinny and looked malnourished. At one of the presentations at Lincoln Center, a model fainted right after the presentation. In addition, I saw multiple models that definitely looked under the age of 16 years old. My question to myself was, what kind of parent can allow their teenage daughter to do this. There was one model in particular that stood out to me. This model could not have been older than 13 or 14 years old. She wore see through pants which showed off her butt cheeks.

How is child pornography illegal but this isn’t?
Last year the CFDA released an updated set of guidelines to ensure the health of models walking New York Fashion Week. These guidelines are clearly an indication of many problems that are faced by models within the fashion industry such as anorexia and child labor violations. I think these recommendations are a good start, however they are not enough to cure the problems that have become customary to this field. As a matter of fact, last year the Israeli parliament passed legislation that forbids underweight models from working on advertisements and enforced that if an advertisement uses airbrushing, computer editing, or any other form of Photoshop editing to create a slimmer model, this fact must be clearly stated. The Israeli government did not stop there. In order to determine if a model is underweight or not, every model has to be certified by a doctor so that they can be employed. In order to receive such certification, a doctor shall measure the model and determine that the model’s Body Mass Index (BMI) is at or above 18.5, which the World Health Organization defines as indicative of malnutrition. Some may find this procedure to be extreme, however I think that necessary measures need to be taken in certain situations and our models/onlookers such as young girls are being psychology harmed everyday by the lack of legislation and attention that is paid to the foregoing issues.

Consequently, my favorite designer of the season was Catherine Malandrino. Not only was her line beautiful and full of class, but her work ethics were above that of any designer that I have seen. At her fall 2013 presentation, employees of Ms. Malandrino were walking around with water and snacks to give the models. As cameras were rolling and new observers stepped into the room, the employees continued to make rounds to make sure the models were well hydrated and fed, regardless of any disruption it could have caused. We need more designers and people within the fashion industry to take an example of Ms. Malandrino. It takes one person to make a difference and I hope that she has made an impact for the future New York Fashion Week seasons.

HERE ARE SOME PICTURES: 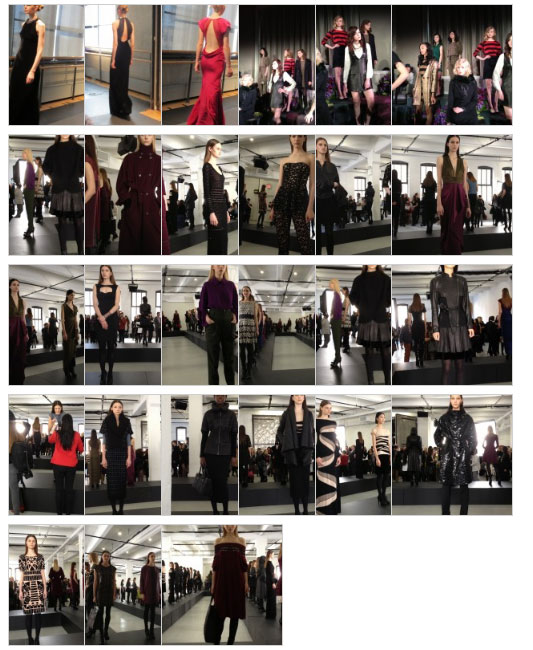 ENJOY SOME VIDEOS I TOOK AT THE FASHION SHOWS!!!
CUSHNIE ET FASHION SHOW
Social Sharing Share on FacebookShare on TwitterShare on LinkedinShare on Pinterest