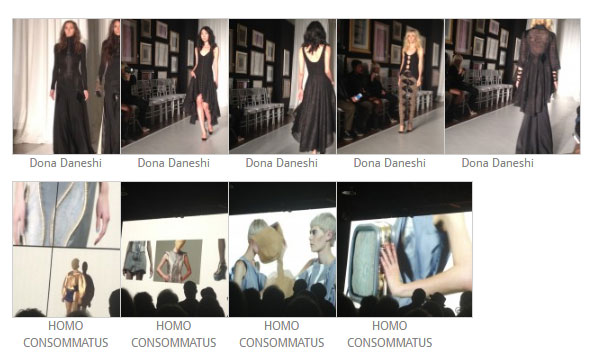 With my “hardly” dangling legs and exhausted aura, I decided that I must finish of fashion week strong. For the foregoing reason, I attended a few more fashion shows to show some support to the exquisite fashion designers that showcased their lines.

On September 11, 2012, I attended the Dona Daneshi runway show. This show consisted of mostly dark color couture, which brightened up the room by its glamour. One of my favorite dresses that I saw this week was presented at this show. In addition, I have to add, that showcasing this runway at an Art Gallery added another kick to the experience. It felt a bit surreal.

The following fashion show that I attended was the HOMO CONSOMMATUS fashion show. A designer from Russia, Alexey Sorokin, created this fashion line. The best way to explain this show in a few short words would be, “S&M meets couture”. The models had leather masks over their faces, which I thought was meant to portray that beauty has no face. In addition, the clothing was very detailed and unique. The line in general was high end with an edge. This was one of my favorite shows.

The last event that I attended was the Los Vladimorovich fashion show. Russian designers also created this funky show. The line was full of color, which is unusual for men’s lines and consisted of many unusual designs that brought eveningwear to day!

I hope everyone enjoyed my mini reviews and pictures/videos of New York Fashion Week SS 13.
Social Sharing Share on FacebookShare on TwitterShare on LinkedinShare on Pinterest