“A Cautionary Tale: How Far will ‘Inspiration’ take you Before the Product Infringes?: Gucci vs. Guess” 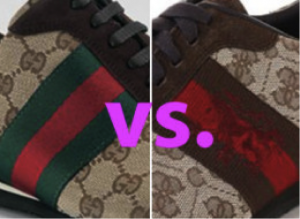 Today we have a guest blogger, Hamutal Ginsburg. She currently attends Pace Law School and is attempting to break into the fashion law industry. Enjoy the article everyone!

Designers are always looking to other designers for inspiration in creating their products. This invariably opens the door for allegations of trademark and copyright infringement. Nevertheless, it is never completely clear how far a designer may go before liability attaches for copying a design.

Infringement lawsuits are most often directed towards protection of the reputation and goodwill of the designer’s brand as well as products bearing the designer’s associated trademarks. Therefore, when adjudicating an infringement case, courts evaluate the degree of consumer confusion that exists between the products. A higher degree of consumer confusion may mean a greater chance of winning the suit. In support of his case, CEO of Guess, Paul Marciano testified saying, “You interpret your own way with your own brand” referring to his opinion on the similarity between Guess’s product with Gucci’s. He denied any intent to “Gucci-fy” his product line.

In 2009, Gucci brought a lawsuit against Guess claiming that it produced “studied imitations of the Gucci trademarks.” The focus of Gucci’s claims was that Guess copied four of its designs: Gucci’s green and red stripe (“GRG Stripe”), the interlocking “G” pattern (consisting of four interlocking “G”s known as the “Quattro G”), the square “G” and the brand’s use of script font logo (“Script Gucci”). Moreover, Gucci’s lawyer, Louis Ederer described Guess’s conduct as a “massive, complicated scheme to knock off Gucci’s best known and iconic designs” reported Bloomberg. Gucci alleged that more than $221 million worth of products were sold bearing such infringements. The federal claims brought by Gucci included trademark counterfeiting, infringement, dilution and false designation of origin. The state law claims, based on New York common law, included trademark infringement, unfair competition and trademark dilution.

In defense, Daniel Petrocelli, one of Guess’s attorneys, argued that Gucci was barred by the statute of limitations from claiming infringement because it “sat on its rights for at least seven years before suing.” Guess further argued, “of the 1,495 Guess products Gucci claimed were infringing, 99 percent could never be confused with Gucci…the numbers don’t add up…if there was a scheme it failed miserably.”

On May 21, 2012, Judge Shira Scheindlin of the U.S. District Court in the Southern District in New York issued a decision in favor of Gucci and awarded the sum of $4.66 million for “damages reflecting lost sales or harm to its brand.” The award was less than 5% of the amount that Gucci sought. In its complaint, Gucci sought $120 million in damages. Gucci was also awarded a permanent injunction against Guess forbidding Guess from using the “Quattro G” pattern in the beige and brown color combination as well as the red and green stripe in the future. Judge Scheindlin found that Gucci submitted sufficient proof to establish the claim that Guess infringed upon its trademarks under both the Lanham Act and New York common law. As a result, the registered Gucci trademarks were entitled to protection under the law.

Although Judge Scheindlin found for Gucci, nevertheless, it was determined that Guess’s use of the “Script Guess” is not likely to cause dilution of Gucci’s brand or to cause a likelihood of confusion. Her decision concluded with the “hope that this ugliness (referring to the heated litigation between the parties) will be limited to the runway and shopping floor, rather than spilling over into the courts.”